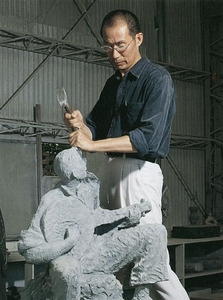 CV
1993 Solo Exhibition at Taipei Fine Arts Museum and National Taiwan Museum of Fine Arts 1996 Solo Exhibition at Hsinchu City Cultural Center 2012 “Shih Chung Hsiang” Sculpture Creation Exhibition at National History Museum
Introduction
Hsiu-Chi Wang graduated from Sculpture Department of National College of Arts in 1973. He participated in a lot of Art Exhibitions and his works often were awarded and collected. He not only had hosted several solo exhibitions, but also being the judges of sculpture competitions.
Growing up in a country village, Wang embraces the nature of a typical country child, diligent, dedicated and determined. Therefore, his themes often centers on human and nature, or the emotional contact and interaction between people. His beliefs, “Respect Nature, value the ethical relation between people, and concern the locals”, show his main concerns for locals and society, which not only elucidates the beauty of human nature but also extends to the love for universe, people and creatures.
He has the specialty of knowing stone materials very well. From the soft and warmness of marble, the hardness and dependable of limestone, to the patterns of aurora stones, Wang always makes the best of work according to each stone’s character. In the statues that features human, the facial expression and the body language are the crucial points, he dedicates to precisely carve the form of the characters in order to capture the figurative nature of the figures. This fully shows his thoughts and characters, leading the audience to perceive the difference between human and then move their hearts. By doing so, Wang believes that, only when reaching this aspect could one surpass the limit of a “worker” and transcend to a status of being a real “artist”.