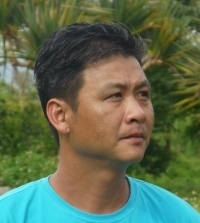 CV
2001~2012 Collective Exhibition by Stone Sculpture Association at Hualien Stone Sculpture Museum
2012  Stone Sculpture Symposium Kazakhstan,Ust-kamenogorsk
2013  1st International Sculpture Symposium Munich, Germany
Introduction
Born in Hualien, Wen-Ren Liao formally took Tsong-Hui Lin as his teacher and learned about sculpture at Lin’s Studio.  He was profoundly influenced by the impression from Lin’s idea of art creation and Lin’s attitude towards family and the way he conducted himself in the society.  He had been following Lin’s teaching until Lin died in 2002.  During those 14 years at Lin’s, he taught him about fundamental skills in sculpture, and Liao gradually became experienced and could perform a variety of art forms.  Lin offored him all the opportunities to practice his skills as well as enhance his aesthetics in sculpture so that he could feel the change in his creation.
Liao sticks to Lin’s ideas of creation in which each art work should “have their own way.”  Therefore, he preserves the natural quality of the stone by shaping it in a simple way and performs the essence of the Nature in an impressionistic style.  By doing so, he highlights the power and the nature of the stone and leads his sculptures back to the co-existence with the Nature.
Lin had realized that the Nature was the source of life, so he does his art learning from the Nature.  Facing an art work, viewers should appreciate such art with their hearts instead of with their eyes only so that they can also participate in the thinking and the imagination over the sculpture.  He imitates the Nature and cultivates his ideas and creation with the energy from the mountains, the sea and the plants, wishing for endless new distinguishable features in his own creation.