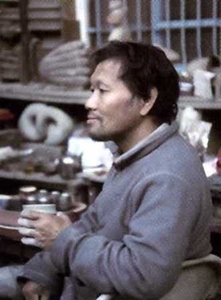 CV
2013  Member Exhibition, Association of Taichung Hsien Stone Sculpture, Taiwan 2010  3rd Sculpture Contest of Tao-Cheng Stone Monkey, Chiayi, Taiwan 2007  Hualien International Stone Sculpture Festival
Introduction
Born in Ching-Shuei, the most impressive memory to Juan was that his family run a little grocery. When his parents did business and Yu drew caricatures on packing papers. The quality of packing papers was worse than brown papers. Juan drew caricatures everyday according to the cartoons that he had watched. In junior college, he studied fine arts in Cing-Shuei Senior High School. As Ching-Shuei is a small town; therefore, the only expression toward sculpture was that he saw sculpture, “The Sculpture of Confucius” made by Hia-Yu Chen whose work was with density and delicacy. Until now, Juan still appreciates that sculpture. Later, studying sculpture in National Taiwan University of the Arts, Juan enlarged vision suddenly with broadness of art, to which, however, he became anxious and indecisive because he confronted with sorts of art.
Before coming Hualien, Juan underwent upside down in life. After visiting Ding-Kun Zuang in 1991, he had much more insight with stone sculpture and started to sculpture stones. In 1992, he won silver medal in his first medal, sculpture contest of Nan-Ying Medal. In 1998, settled in Hualien, Juan found Ci-Jiao studio of stone sculpture. He lives simply, being fond of a simple and routine life; to which he is extremely satisfied with creation as a man practicing Buddha teaching. Juan creates four theme series of works that related to his spiritual retrospect: “Life is of ephemerality”, “Pressure, Anti-Pressure Series”, “Mind Series” and “Water Series”, through these series, Juan shows his serenity while confronting with transitory changes in life. The clowd is formed according to what human perceives. Contradictory, he has to feature the characters of stones based upon academic training.