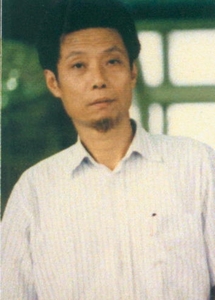 CV
1965  Premier Medal of Special Collection, 20 th National Art Exhibition, R.O.C. (Taiwan)
Gold Medal, 5 th National Art Exhibition, R.O. C. (Taiwan)
Premier Medal, Tai-Yang Exhibition of Arts
1994   Po Suo Jhih Men (婆娑之門)” and “Pillar of Totem” at Outdoor Exhibition, Asia Contemporary Sculpture
1995   Love” displayed, and Planner of Exhibition Planner of Creation Workshop of Sculpture Art in Graz National Park, Austria
Introduction
Born in a family of twelve brothers and sisters, in Da-Jia Town of Taichung, Kuo ranks as eleven. He did not like studying, perhaps out of inherited talents from his father, he had a remarkable performance on subject of fine arts. He studied fine arts in National Taipei School of Education. After graduation, he returned to teach in Feng-Yuan School of Blind and Deaf-Mute. Two years later, he studied sculpture in National Taiwan College of The Arts and began his fatal relation with sculpture accordingly.
Sculpture concerns not of volume structure as well as material facets, but of “space” that is main “materials” of sculpture. Among contrast and conflict of applying compound materials, Kuo constitutes forms by re-arranging, locating and forming space. Especially, exhibiting quality of stainless lies in not only mirroring views scenery and things but also reflecting its own image; extensively achieving its special effect of creating a space of “Another Dimension” that reflecting tangibility and abstract.
Kuo applies poly-materials and various sculptural skills in order to make breakthrough from rules of “absolute” and “sculpture”, attempting to attain infinite freedom for individual creation. Using embedded skills to apply different materials or containing language of painting—all express his lively free thinking of containing all things. The constitution of abstract forms, in association with familiar totem symbols existed in collective human memory, produces an intense feeling of sudden and impacts upon people. Accordingly, tremendous tension and confusion of his creation constitute qualities of drama and humanness among both of his works and space. Kuo insists to re-construct individual thinking logic, developing an idea of “Space Forming” based upon eastern perspective of abstracts and concreteness. He pioneers at promoting quality of sculpture and spatial exhibition, not only building up his own milestone, but also being influential upon moving contemporary art in Taiwan.