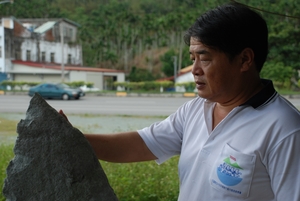 CV
2005  “Through Time and Space” ---Judges’ Award at Stone Sculpture Exhibition, Hualien
2005  Collected from Tian Shi Cheng Chin (turning classic sculptures into gold) Competition by Hualien County Stone Sculptural Museum
Introduction
Chien-Ren Yeh finished his school in 1970 and then went to the army.  While he was in the army fulfilling his military service, he had the access to sculptures and felt interested. Discharged from the army, he tried to create his own business at an advertisement ageny at age 24 but resigned from his job at age 30.  At age 30, he first experienced stone sculpture in tea pots, which lasted till he was 36.  That was also the heyday of tea pot art.
He kept the contact with art off and on and tried to feel his way in sculpting.  He became a member of Hualien Stone Sculpture Association in 1997 during which Ching-Yun Liao was the president of the association.  Even though he never took any official courses in sculpting, he felt no regrets.  Instead, he thought he could be well-inspired from his very instincts.  His creation might not be that professional, but his art works were often satisfactory.
Chien-Ren Yeh was born in a traditional rural village in Hualien, and thus he was greatly influenced by the farmers‘ outlook on the universe. They regard the six directions (north, south, east, west, earth, heaven) as the universe, the four directions (north, south, east, west) as the accesses to the heavenly Utopia; in their minds, the grand universe is such a infinite vastness to human beings.  The black hole is only a part of the galaxy in this universe, whereas the galaxy part of the universe, the earth a drop in the universe.  The earth is too minute to be seen; however, an artist’s hands seem to have been powerful enough to be able to manipulate the whole universe by organizing everything as they will, as easily as rolling up a scroll.  He simply uses a cubic shape to present the connection of time and bearing.