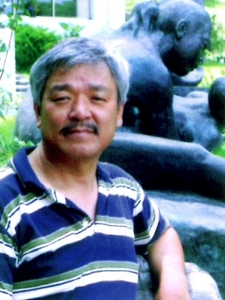 CV
1997   “Mona Rudo” & “Statues of Atayal Heroes” ---commissions placed in Ren’ai Township, Nantou County
2001   “Spreading the Wings” & “Fluttering Petals of Plum Blossom and Lotuses”---1st Prize from Public Art Exhibition by Sun Moon Lake National Scenic Area Administration, Tourism bureau, MOTC
2002   “Tackle” ---commission from TamKang Senior High School for a bronze sculpture in memory of the 80th anniversary of TamKang Senior High School Rugby Football Team
2004   1st Prize from public art for the remodeling of the Library Building, Food Science building and Language Lab in National Chung Hsing University
Introduction
Lien-Huai Teng (used to be Ren-Kuei Teng) and Ju Ming were both apprentices under sculptor Yu-Yu Yang.  Teng’s early works, mainly realistic, were skillfully and delicately made and presented abundant sentiment with vivid looks.  After he followed the famous master, he tried hard to figure out Yu-Yu Yang’s creation concept and style and changed his to impressionistic style.  He presented the power and beauty of an art work as well as the ceaseless energy in life by simple lines.
Born in Yilan, Taiwan in 1950, Teng has loved drawing since he was a child.  Being a student, he drew in almost all his textbooks.  He went to Hualien for work when he was discharged from the army in 1974, the period of full bloom for stone sculpture industry.  At that time, stone sculptures were exported worldwide; the supply even fell short of demand.  Therefore, he decided to be an apprentice in a marble sculpture factory.
In 1982, he received a commission from a well-known Buddhist Master Kuang Chin for a sculpture of the master himself.  In order to present truthfully the original look of the master, Teng visited the master for three times instead of forming the sculpture based on a mere photo.  Through the talks with the master, Teng had a thorough understanding of the master’s look and his thinking.  He then completed, with great reverence for the master, his first sculpture creation with “Dionyssos Pentelikon White Marble.”
Teng has been engaged in stone sculpture creation for more than 20 years.  His works deliver abundant emotions and touching stories and act out what lives are.  His sculptures “the Three Generations,” “Harvest,” “Excellent Cooperation” and “Brothers” completely show family love and deeply move the viewers.