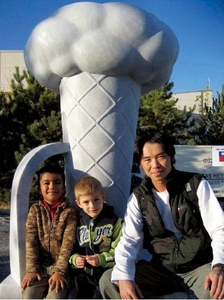 CV
1993 24th National Skill Competition. First Prize for Stone Sculpture Category 2011 International Sculpture Symposium, Penza, Russia. (“The Messenger of Dream”) 2011 Stone Sculpture Relay Exhibition hosted by Hualien County Cultural Affairs Bureau—“Diao Shin Li Yi” collected by Hualien County Stone Sculptural Museum
Introduction
Ming-Sheng Wu graduated from Yu-Li High School in Hualien, the only school that provides courses for Stone Processing. His interest towards stones started here while he encountered a few creators and artists, and his interest gradually turns into a hobby until now.
Even though Wu has expertise on carving skills, what confuses him more is the selection of the most appropriate idea among the plenty of thoughts and inspirations.
The themes of his works nowadays emerge from a flash of aura originated from people, events, objects and natural phenomenon. He completes his artworks fast and he doesn’t stick to one specific theme. Wu believes that Stone Sculpture is an activity of sensation--it is completed only through the interactive mutual construction between the work and the audience. He likes marble because of the dear feeling it carries and its special white color.
His theme on time usually lingers between reality and abstraction, such as that the space where the mountain and the clouds co-exit in same place. Sometimes, he also presents human desire and emotion or to find a philosophical pleasure among simple things, from which the profound meaning behind is being brought—all these are his insists on creation.