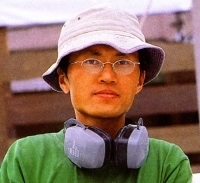 CV
1999  Outdoor Workshop, Theme Exhibition of Hualien International Stone Sculpture Festival, Taiwan
2003  Kagawa-Ken Mure International Exhibition of Outdoor Stone Sculpture Festival, Japan
2010  Racconigi Biennial International Exhibition of Outdoor Sculpture, Italy
Introduction
Born in Taipei in 1967, Hu majored in sculpture group of Fine Art Dept. and graduated from Taipei National University of the Arts in 1992. He took M.A. diploma from same school in 2010. During school years, he won many medals of sculpture in many art exhibitions. During his study, Hu’s works had won medals of Taipei Exhibition of Arts, Exhibition of Hsin Jhan Wa, Provincial Exhibition of Arts and Biennial Exhibition of Modern Arts. His great ambition was demonstrated from his stone sculpture “Repetition” which is with 400 cm height and the wooden sculpture “Repetition” which is with 350 cm height in 2003, which spread vertically at the corner of exhibition and seemly possessed the qualities of penetrating space. The image combined with ladder and seesaw, going up but unable descending down to the earth. It conveys an image of redemption as delivered by Sisyphus in Greek mythology, in which Sisyphus never ceases to roll rocks by foot on two mounts. Therefore, the creation “Repetition” combines the interests of delicacy and intelligence. As Hu constructs a strong self-identity and does not confine himself to single stone materials, so he often applies the materials such as brass, aluminum and carbon steel.
Hu ponders continuously in Mount. Da-Tun, and the mainspring of his art creation is to endow them with philosophical meaning. Audiences have to probe them and share with the form and beauty of his works. Another example is a work “Constitution”, in displayed in an exhibition. It is a metaphor of implying frameworks and systems in human society. He makes breakthrough of using an unusual embedded structure, in which bird cage implies an association of Chinese hobbies, bird-keeping and bird-watching; his creation shows human cruelty to animals in natural ecological environment. The “step” image of his creation “Yuen Siang” provides audiences an imagination of ascending up of the steps; which through delicate treatment of brass material and rough surface of stone materials, quantitative feeling still remains after treatment of overall shapes. All of these creative ideas and skills show in later creations, “Wan Sing Yi Jhih” and “Pupa” that combined with multi-materials and forms. Likewise, their dazzle flashes upon the eyes of audiences.