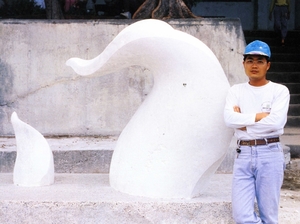 CV
2007 “Love”---monumental sculpture collected by Hualien International Stone Sculpture Festival
2009 “Communication”--- sculpture collected by Hualien International Stone Sculpture Festival
2010 “Kindly Influence of A Good Teacher”sculpture collected by Tsinghua University, Beijing at Sculpture Exhibition for 100th Anniversary
Introduction
Yung-Hsien Wei has loved art since he was young.  He has never taken any formal classes in sculpture, but he started doing stone sculpture in 1980 and learned sculpting skills under Mr. Ting-Kun Chuang for six months in 1981.  He seized every opportunity that he could to learn about sculpture such as going to sculpture exhibitions around Taiwan and asking other sculptors for suggestions on skills.  His enthusiasm in learning helped him lay the sound foundation of his sculpting.
He said that even a mere sentence, a poem, a feeling or an elegant line from a painting could inspire him to create an art work; inspirations actually emerged in great numbers.  He then would turn the inspirations into a rough drawing, then into a real model with clay, and finally into a stone sculpture.  He gives considerable emphasis to gauge block transition and the varying of lines.  He wants to achieve a coordinate beautiful level by virtue of the varying lines from emotions in sight.
In addition, he had his first contact with Buddhism when he was young; as a result, he accordingly liked challenging himself with sculpting Buddha.  He then acquired the essence of sculpting from the imitation of ancient Buddha sculptures, yet he doubted whether imitation was creation?  What were the so-called contemporary Buddha’s sculptures?  He had abundant questions for himself.  Since then, he tried to jump out of the box and interpret what a sculpture of Buddha should be like in his own way.  He made a breakthrough in the stereotype of a sculpture of Buddha by not putting emphasis on the facial expressions.  He presented in an asymmetric manner and mingled the sculptures with western aesthetic elements as well as the rhythm of the simple lines forms.  Finally, the gentleness and the compassion of Buddha were then shown through the beautiful gestures in sculptures of Buddha.